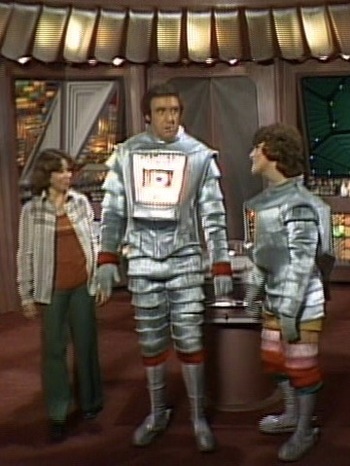 The Lost Saucer was yet another of Sid and Marty Krofft Productions' Saturday morning children's series involving characters being whisked away to another land, and spending the entire length of the series (one season, in this case) trying in vain to get home.

This time around, two androids named Fi (Ruth Buzzi) and Fum (Jim Nabors) land their saucer on a residential street in modern-day (1975) Earth; there they attract the attention of a young boy named Jerry (Jarrod Johnson) and his babysitter, Alice (Alice Playten), whom Fi and Fum invite aboard their saucer to show them what it can do. Unfortunately, Fi and Fum also attract the attention of local police and fire departments, and in a panic, take off... with Jerry and Alice still on board.

Since the Lost Saucer had the ability to travel through time, each attempt to bring Jerry and Alice back home results in them landing back on Earth, either in the past or in the future.