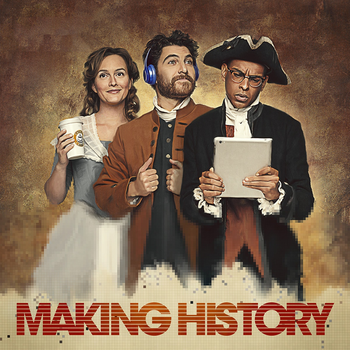 Making History was a 2017 comedy that aired on FOX for one season starring Adam Pally, Leighton Meester and Yassir Lester. Dan (Pally) is a janitor at a local college who has inherited a time machine (in the form of an oversized duffel bag) from his father which he uses to... take weekend trips to the past and seem important and romance Paul Revere's daughter, Deborah (Meester). Eventually, he begins to suspect that his actions may be affecting the future so he recruits Chris, a history teacher from his school (Lester), to help him get history back on track.
Advertisement:

Unrelated to the 1996 Stephen Fry novel, and neither are related to Turn-Based Strategy series of the same name.