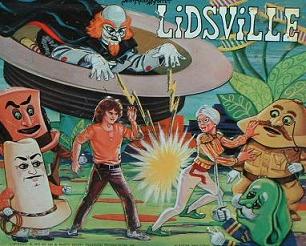 It's the kick-kick-kickiest...
"He was stunned and he was fascinated, still he had to see
There was something deep inside the hat, What could that something be?
Then cautiously each step he took, he climbed up on the brim to look,
And all at once the hat began to shake, and rock, look out!"
Advertisement:

(The point of no return for poor Mark.)

The Planet of Hats taken to its logical extreme: Most of the characters are living hats.

Extremely similar to H.R. Pufnstuf, Lidsville featured a boy, Mark (Butch Patrick, of The Munsters fame), who falls into a stage magician's top-hat into the eponymous hat community. Having gained control of a ring-dwelling (non-hat) Genie (played by a gender-flipped Billie Hayes, who also played Witchiepoo on Pufnstuf), he is pursued by the magician's Lidsvillian evil counterpart, HooDoo, played by a pre-Match Game Charles Nelson Reilly — not a hat himself, but living in a giant topper and flying around in a giant opera hat. Produced by Sid & Marty Krofft Productions back in 1971, with their trademark surrealism, the concept bears a suspicious resemblance to an earlier British stop motion cartoon called Hattytown Tales... though it was only two years earlier, and had none of the overarching plot (such as it is) of the classic Sid and Marty Krofft Productions "human lost in a strange land" story, and lacked any "human" characters. (If H.R. Pufnstuf was inspired by the MGM's version of The Wizard of Oz, then Lidsville was inspired by Alice's Adventures in Wonderland.)

Parodied on Mr. Show in the sketch "The Altered State of Druggachusetts."