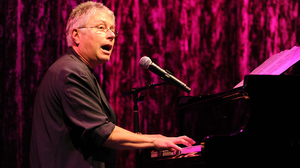 Disney's musical Renaissance man.
"I always wanted to be a composer, and I sort of went in to NYU as pre-med because I just thought, 'Well... who actually becomes a composer?'"
Advertisement:

Alan Irwin Menken (born July 22, 1949) is a composer, songwriter and multi-instrumentalist for theater and film. Since 1989, he has been the go-to guy for Disney musicals, having composed the songs and scores for The Little Mermaid, Beauty and the Beast, Aladdin, Pocahontas, The Hunchback of Notre Dame, Hercules, and Tangled. This has earned him eighteen Academy Award nominations, eight of which he won — more Oscars than any other living individual. In 2020, he became the 16th person to achieve the EGOT - though Menken proudly talks about the Golden Raspberry Award which he won for

Newsies, though ironically, he earned the Tony when it was adapted to stage. To date, he's the only EGOT to also have a Razzie.

Menken first made a name for himself as a composer in 1982 with the Off-Broadway musical Little Shop of Horrors, for which he co-wrote the songs with lyricist/librettist Howard Ashman. The musical's producer, David Geffen, recommended them to then-Walt Disney Pictures chairman Jeffrey Katzenberg (Little Shop company manager Peter Schneider was vice president of Disney's feature animation division at the time) to compose the songs for the studio's adaptation of The Little Mermaid (1989), beginning what would be a long and fruitful partnership between Menken and the studio.

Following Howard Ashman's death from AIDS in 1991 during the production of Beauty and the Beast and Aladdin, Menken has written with an ever-rotating cast of lyricists, including Tim Rice, Jack Feldman, Stephen Schwartz, David Zippel, Glenn Slater, and Lin-Manuel Miranda.

He had been set to compose for the film that would eventually become Frozen, until he was ultimately replaced with Robert Lopez & Kristen Anderson-Lopez and Christophe Beck, instead serving as composer and songwriter for a different Disney project, the short-lived ABC musical series Galavant. Afterward, he was going to provide music for a DreamWorks Animation movie titled Lidsville, but after former co-worker Katzenberg's studio wound up in a rut and restructured their business strategy and film lineup, word on Lidsville has gone silent.

In 2016, he returned to his roots in tongue-in-cheek raunchy humor by co-writing the score (with Christopher Lennertz) and composing the opening song "The Great Beyond" for the R-rated animated comedy Sausage Party.

For samples of Alan Menken music, go to AwesomeMusic.Disney.