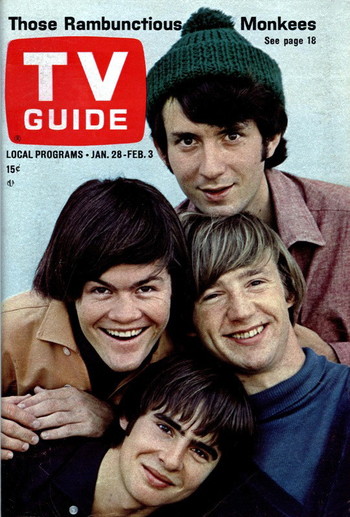 Top row: Michael Nesmith. Middle row: Micky Dolenz (left), Peter Tork (right). Bottom row: Davy Jones.
"The series stars a fearsome foursome in The Monkees, a wholly manufactured singing group of attractive young men who come off as a combination of The Beatles, the Dead End Kids and the Marx Brothers. Critics will cry foul. Longhairs will demand, outraged, that they be removed from the air. But the kids will adore The Monkees; you can bet on it."
—The Washington Post, May 31, 1966
Advertisement:

This article is about The Monkees' TV show; the article about the music is here.

The Monkees was about four incredibly clean cut aspiring young musicians with regrettable taste in clothes and haircuts who people on the show treated like they were pierced and tattooed Alternative Rockers. But hey, it was The '60s!

This is one of the first American TV series to rely on Meta Fiction and Fourth Wall humor. Some jokes work better when you know a little about each actor's real life. An important part of the show itself was the tension between the cast's need to be taken seriously by their peers and the series' younger-skewing fantasy of being an independent, cool band of best friends. It was a refreshing change from typical TV for many kids in the audience.

The series ran two seasons on NBC from 1966 to 1968. The show ended its initial run when the group and the network could not agree on a format for the third season. The band wanted to update the format and make it more like a variety show, while the network wanted to maintain the status quo. NBC decided to pull the plug, but did make an agreement with the band for three television specials to be produced. When the first, the extremely weird 33 1/3 Revolutions per Monkee, bombed in the ratings, plans for the other two specials were cancelled. However, Saturday morning reruns on CBS and ABC were successful. Then in 1986, a marathon showing of the series on MTV produced that network's best ratings to date, propelling the group back into the limelight. Over the next few years, the series would return to syndication on Nick @ Nite and a variety of local channels. It's available in its entirety on VHS, DVD and Blu-Ray, and as of 2011 the series has been a weekend fixture on over-the-air digital subchannel network Antenna TV, which also occasionally airs Head.

Here we come, tropin' down the street:

In this generation, in this tropin' time...

The Monkees' iconic theme song for their television series of the same name.

The Monkees' iconic theme song for their television series of the same name.