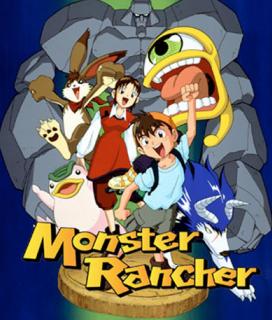 The anime of the game of the same name. The plot of the series followed the adventures of Genki Sakura, a very hyperactive boy who wins a beta disk of "Monster 200X" (which has the same properties of the real MR game) in a video game tournament. As soon as Genki starts it, he is transported inside the game, finding a real world of monsters inside. The land is currently in turmoil due to an evil monster named Moo, who turns monsters evil and rules with an iron fist.

Genki joins up with a girl named Holly and her monster Suezo, a pair on a quest to find and unlock the legendary Phoenix, the only known monster that can stop Moo. Genki gains his own monster, Mocchi, from the Monster 200X disk that was transported with him. Soon, the group are joined by Golem, Tiger, and Hare in their uphill battle against Moo and his forces.

After two seasons against Moo, the third season takes place one year later and has the group trying to save the soul of Holly's father, which is trapped in a dark mystery disk along with Moo after his defeat. However, most of the MacGuffins the crew had before are now prizes in a tournament, forcing the crew to enter it to accomplish their goal. All the while, they continue to dodge attacks from Durahan (who was an Elite Mook in the second season, now taking the Big Bad spot here) and his baddies looking to steal the disk and revive Moo.

Much like the games it was based off, the show became a big Cult Classic and today is often regarded as one of the best animated shows based off a video game. The show managed to run for three seasons, two of which aired stateside on Fox Kids and ABC Family, respectively. The third never aired on TV in the U.S., but was dubbed, and is available online

to watch. The show was also quite different from the other Mon shows at the time (Pokémon, Digimon) in that the human protagonists were not afraid to battle alongside the monsters.

After 14 years, the series got a complete English and Japanese box set release

thanks to Discotek Media.