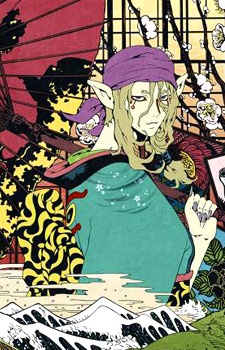 No relations to Princess Mononoke, the Miyazaki film.

A spin-off of the third installment of Ayakashi: Samurai Horror Tales, made by Toei Animation. Unlike its predecessor, these ayakashi have merged with powerful human emotions to become mononoke, which are even more dangerous and hard to combat.

The story follows our mysterious, nameless medicine seller in his travels and the various people — and monsters — he encounters. To slay each mononoke he must first discover its Shape (form), Truth (origin), and Reason (motive), which often proves far more difficult than it sounds. The 12-episode series is divided into five arcs.

The animation style is done in Unmoving Plaid similar to Gankutsuou (although to a lesser extent—there are actually some solid colors here and there, for example), and though it may take some getting used to, the way the series utilizes it is both beautiful and chilling.

A manga adaptation of the series started around the same time in 2008, covering the "Bakeneko" arc. A separate manga covered the rest of the anime's arcs, ending in 2019.