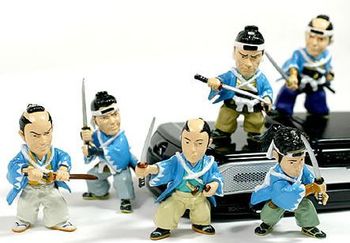 Something of a popular favorite for inclusion in samurai shows, the Shinsengumi have the advantage of actually having existed in the Bakufu era of Japanese history. The group, originally called the Roushigumi (lit.: "Roushi Group," Roushi being a synonym for Rōnin), later changed its name to the Shinsengumi ("Newly Selected Corps") and moved to Kyoto. There, taking the side of the current shogun, they requested and were granted policing powers to deal with the revolutionaries who wished to see the return of the Emperor to power. The raid on Ikeda-ya, where the Shinsengumi managed to stop revolutionaries from setting fire to the city, is probably the most well-documented single engagement of the group during their existence.

Easily recognizable by their distinctive sky-blue-and-white haori jackets. (Historically, these may have been yellow and white, but always seem to be portrayed as the blue and white style on television. The design were apparently based from their claimed Spiritual Predecessor, The 47 Ronin.) As something of a far right-wing praetorian guard, the Shinsengumi embodies the Knight Templar trope far better than, well, the actual Knights Templar. Ostensibly defenders of the shogun and Japan, they soon transformed into a ruthless Secret Police force with an unbelievably strict code of conduct, and what even The Other Wiki has to give up on sugar-coating and describe as "an unflinching readiness to kill." Despite their job technically being to keep the peace, they were generally (and deservedly) viewed as a threat. Like other nationalist paramilitary movements, inter-faction violence and assassinations were frequent.

Though they only ever numbered about three hundred at the very most, and were active for only about five years, they're often credited with singlehandedly delaying the Meiji side's eventual victory over the Tokugawa regime.

The leadership of the group was made up of the following individuals:

Tropes that are frequently used in relation to the group:

The Texas Rangers were pretty much the Wild West equivalent to these guys, except their Badass Longcoats were brown rather than blue (or yellow).

The Shinsengumi in fiction: