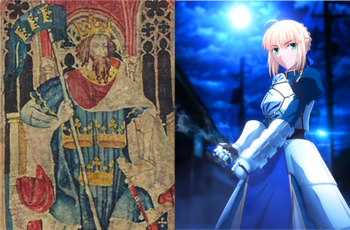 Left: Legendary King. Right: Anime... Queen?
Rin: Why are you a woman?
Sir Francis Drake: Well, I started growing breasts when I was thirteen and then...
Rin: Not remotely what I meant!
— Fate/Harem Antics
Advertisement:

This character is supposed to be a recognisable figure from history, but diverges in one notable way: their gender.

In-Universe explanations for this vary. Sometimes "Alice" disguised herself as "Aleister" or vice versa, sometimes the details were lost over time or covered up for political reasons, and sometimes it's just an Alternate Universe where the figure is replaced by a Distaff Counterpart or Spear Counterpart. Urban Fantasy has its own variant where history is unaltered, but the character is Reincarnated in the modern day as the opposite sex.

Can be used to "spice up" a historical tale with new possibilities for character relationships, extra challenges for the protagonist to overcome... or just Fanservice. It can also happen as a side-effect of combining the roles of two or more people together. In extreme cases just about everyone in the story is like this, usually for the sake of creating an Improbably Female Cast.

Since a primary advantage of using this trope is its ability to prevent male-dominated Chromosome Casting, as exemplified by most of the examples on this page alone, in published works this trope is almost Always Female, likely due to the vast number of prominent male historical figures. Male examples do exist but they're exceedingly rare.

This is a Sub-Trope of Historical Domain Character and Gender Flip. Frequently overlaps with Beethoven Was an Alien Spy, Historical Beauty Update (due to Attractive Bent-Gender) and She Is the King. Not to be confused with Cross-Cast Role.