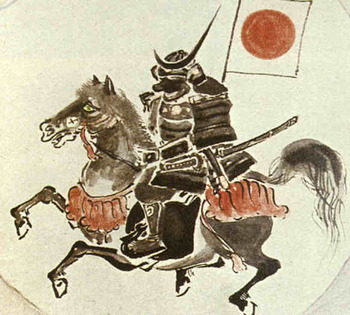 The One Eyed Dragon and the reason why Japanese has the word for 'flashy'note Date means 'flashy' in Japan and named after his attitude
Advertisement:

The daimyo, not the blacksmith

. That guy's someone else.

Date note Also sometimes read Idate; pronounced "dah-teh" Masamune (1567 -1636) is one of the most famous feudal era daimyo of Japan. Nicknamed Dokuganryuu ("One/Single-Eyed Dragon") by later generations, and known for his helmet adorned with a huge crescent moon, he almost single-handedly unified Northern Japan with great ferocity and continued to rule as a political juggernaut for four decades through cunning and insight, especially in regards to foreign trade, Christianity and allegiances. He was an ally of Tokugawa Ieyasu during the Battle of Sekigahara and later during the Siege of Osaka.

He was born as Bontenmaru, eldest son of Date Terumune, and generally he showed promise and talent in warfare in his early stages. Though as a child, he suddenly lost his right eye for reasons, mostly acknowledged as being caused by smallpox, and either Masamune or his loyal retainer Katakura Kojuro decided to just pluck that one eye out rather than causing further damage and to not hold him back. Still, it was this deformity that made Masamune's mother, Yoshihime of the Mogami clan, started disapproving him.

He married his official wife Megohime as part of the alliance with a lesser clan of Tamura, and the next year after, he accompanied his father in a battle and had a great success despite his one-eyed state. The marriage with Megohime, however, still revealed to the world that while the Northern Japan were linked with alliance, it still looked rather tenuous and could break into a war of betrayal at any time. And the suspicion came through shortly after Terumune semi-retired and named Masamune the heir: Suddenly, a certain retainer related to Megohime's clan named Ouchi Sadatsuna decided to defect to the Ashina clan. Pissed off with this, Masamune decided that he's had enough with being submissive with these 'false' alliances, even if he has to stomp former allied clans, the whole Northern Japan would be unified under his boots. One particular defeat later, he quickly came back up and started steamrolling through Northern Japan with the combination of Masamune's ferocity and highly adaptive skills in warfare. And thus, he became known as "The One-Eyed Dragon".

Masamune's rampage eventually reached the clan known as Hatakeyama/Nihonmatsu, which he curb-stomped and decided to accept their surrender at cost of them giving up a majority of their lands. The surrender turned out to be staged, when Masamune least expected it, the clan, led by Nihonmatsu Yoshitsugu, took Terumune hostage (in the middle of a banquet while asking Terumune to maybe tell his son to calm down a little, whereas Terumune replied with how he can't stop his son, since he approved his new management) and demanded Masamune to reverse his clan's misfortunes in exchange of his father. Instead of being a complete Distressed Dude screaming for help, Terumune instead just told Masamune to just open fire anyway, killing him along the way. Masamune had to comply on that, and as a retribution later, he made sure not just to re-conquer the Nihonmatsu/Hatakeyama supporters, he'd torture them too, no quarters given anymore.

With his father gone, Masamune continued his conquest, hindered only by a power struggle within his family: his mother, who favored his younger brother Masamichi, allegedly went as far as poisoning him. In the end Masamune killed his brother and disinherited him for seven generations(!) so no descendant of his would be a threat to Masamune's and his heirs' position. Yoshihime fled back to her home and Masamune never saw her again (which apparently did wonders to their relationship, as they seem to have reconciled with time). Afterwards, Masamune resumed his conquest against his neighbors and after one particular battle in Suriagehara (where aside of crushing the Satake and Ashina clan, Masamune had to confront his other aunt, Onamihime), his unification of the north was finally complete.

But by the time he did so, Toyotomi Hideyoshi beat him to a punch and had already risen to power, conquering the rest of Western to Eastern Japan. So, rather than risk a battle he'd never win against, Masamune had no choice but to become Hideyoshi's vassal. Although not really enthusiastic about the prospect, he regardless surrendered while wearing extravagant clothes and carrying a huge cross on his back, since it's just in his nature to be that showy.

Under Hideyoshi's banner he took part in in eliminating the Hojo at Odawara and was rewarded, moving to Sendai (in the region ravaged by the 2011 earthquake/tsunami) as his home base and turning it from a small rural community into a prosperous city. He eventually allied with Tokugawa Ieyasu against an aging Hideyoshi, and aided him in seizing power following Hideyoshi's death. It took a long time for him to give up his dream of ruling all Japan, but after he finally realized he had no chance, he was a loyal and steadfast ally. Although considered a Wild Card and not really trusted by anyone, Masamune did prove his loyalty and even recited a poem when Ieyasu was on his deathbed.

He kept several Christians under his protection (factoring from either his favorite daughter or his general Foreign Culture Fetish) and encouraged travel to foreign countries, even sending a letter to the Pope trying to establish ties for a potential alliance. He was also greatly interested in cookery and art, and possessed a rather flamboyant taste, leading folk etymology to assign the kanji of his surname to the word date (approx. "flashy").

His lasting success, along with his unique personality, means Masamune has remained as one of the more popular historical figures in modern Japan as well as the Spotlight-Stealing Squad when it comes to Tohoku region area of the Japan during the Sengoku Period: It would always be his clan that represented northern Japan.

Notable people that were around Masamune's rule: