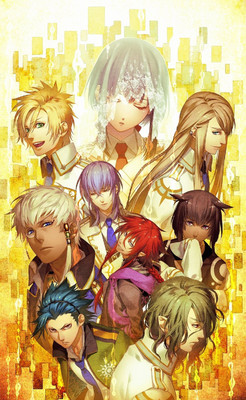 Yui Kusanagi is an average high school girl who also works as a miko on her family's shrine. One day, while she's at the shrine's warehouse, she finds a mysterious Cool Sword, Ame-no-Murakumo-no-Tsurugi, that takes her to another world - a garden created by the mighty Zeus for the gods to live in. In the middle of the garden, there's a high school that some of the gods attend. Zeus gives Yui the task to attend the school and teach the gods about love in a time where the worship of gods is slowly receding. Thus, in the school she meets Apollon and Hades from Greek Mythology, Tsukito and Takeru from Japanese Mythology, Loki and Balder from Norse Mythology, and Anubis and Thoth from Egyptian Mythology. However, there's a problem - she doesn't know anything about love, and if she refuses, she'll be punished by Zeus.

A visual novel for the PlayStation Portable released by Nippon Ichi and Broccoli (after the success of the latter with Uta no Prince-sama) with art by Kazuki Yone (of Hakuouki fame) in 2013, it was adapted into an anime by Brains Base in 2014. A sequel to the original game called Kamigami no Asobi Infinite was released on April 21, 2016 for both the PSP and Playstation Vita.

A translation project of the game is on the making, and can be found here

This visual novel and its anime adaptation provide examples of: