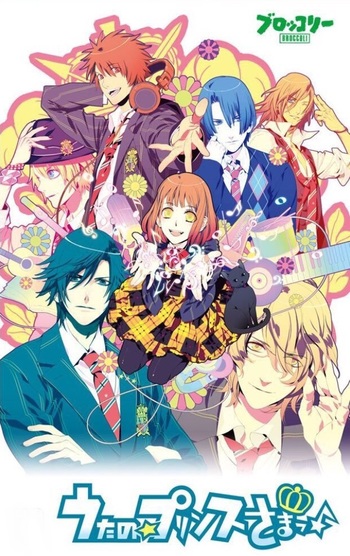 You will find the music more beautiful than a kiss.
Advertisement:

Hailing from the country, Nanami Haruka comes to Tokyo to attend the prestigious Saotome Academy, a school for aspiring idols and songwriters run by the legendary former Idol Singer Shining Saotome. To fulfill her dream of composing a song for her ultimate idol, Hayato, she is given a chance to pair up with one out of the six students she meets in the academy to perform a song that will determine their potential for graduation. However, the school has one drastic rule: falling in love is forbidden.

Uta no Prince-sama (うたの☆プリンスさまっ♪ Uta no Purinsu-sama, lit. "Princes of Song") is an otome Visual Novel released by Broccoli for the PlayStation Portable. Originally a rather low-budget title which mostly relied on its light-hearted atmosphere and a cast of some of the best singing voices in the seiyuu industry, the game became popular quickly, leading to a remake with improved art, production of drama CDs, and spawning a whole franchise of its own.

Advertisement:
open/close all folders
List of visual novels in the series
Drama CDs

The page for the character sheet is here. The tropes exclusive to the anime are here, while the tropes found in the whole franchise are here. Tropes related to Shining Live can be found here.

Tropes found in the games and drama CDs are: