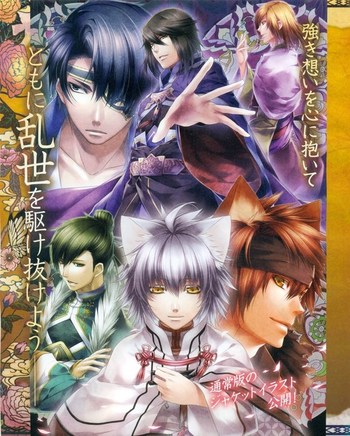 The Juuza. That is the name given to those of the 13th Zodiac: the cat people. Seen as a vulgar and contemptuous race, they live a life of seclusion away from human eyes. However, as the end of the Han Dynasty draws near, the rise of the Yellow Scarves has thrown the land of the Three Kingdoms into turmoil. The story begins in a peaceful cat village, whose peaceful life is interrupted when a general, Sousou, and his punitive force press their way into the village, accusing them of being allies with the Yellow Scarves. Discovering the Juuza's natural fighting talent, Sousou forces the Juuza to join his army. Led by the village's strongest fighter: a young woman named Kan'u, the Juuza are swept into the chaos and turmoil of human warfare as the story revisits major events and battles of the Romance of the Three Kingdoms.

Juuzaengi ~Engetsu Sangokuden~ (also romanized as Jyuzaengi or Juuza Engi) is a popular otome game franchise developed by Otomate of Idea Factory and Red Entertainment. It was originally released in Japan in 2012 for Playstation Portable and a sequel Juuzaengi ~Engetsu Sangokuden~ 2 was released in 2014. The two titles have been compiled in a twin pack for both PSP and PlayStation Vita.

A manga serialisation began in 2012 with art by Sayo Ichi and an animated 25-minute OVA adaption, subtitled 'Gaiden Youzhou Phantom Night', was released in 2014.