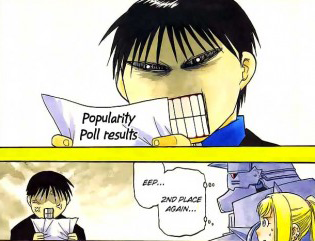 They're usually competent, skilled, or (if it is romance we are talking about) relatively inoffensive at least. But they never quite succeed. There's usually some character (usually, but not always, the protagonist) who beats them. If it wasn't for That One Person they'd be number one, but they aren't.

So they're number two, making them prime material for Rival Turned Evil. If a Sibling Rivalry is involved being always second best often comes part and parcel with being The Un-Favourite.

Compare Can't Catch Up, The Worf Barrage, and Driven by Envy. Romantic Runner-Up is a version of this character specific to romance stories. Poor Man's Substitute is the version where a character acts as a poor replacement. When it's more perceived than actual, it's Always Someone Better. Often related to Second Place Is for Losers and The B Grade.