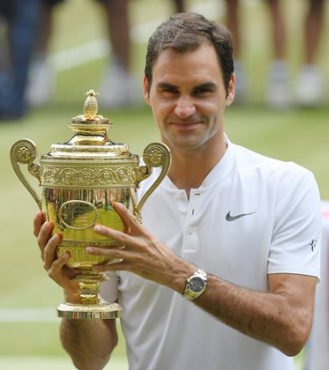 Federer first caught the attention of the tennis world as a 19-year-old at the 2001 Wimbledon Championships where he upset the defending champion Pete Sampras in a fourth-round match that is now viewed as a major Passing the Torch moment. It took two years after that for him to win his first Grand Slam at 2003 Wimbledon but he then dominated the men's tennis tour for the next four years to a degree previously unseen in even Sampras's heyday, winning 11 of the next 17 Slams and holding the No. 1 ranking for a record 237 consecutive weeks. It wasn't until 2008 that he was dethroned from the No. 1 position by his friendly archrival Rafael Nadal who defeated him to win the 2008 Wimbledon title in an all-time classic final.

Federer further proved his incredible longevity as a top player by winning the 2018 Australian Open for his 20th Slam and becoming the oldest-ever No. 1 later that year at 36 years of age. And he's still playing to this day, having recently won his 100th singles title in Dubai to become the only male tennis player other than Jimmy Connors to win at least 100 singles titles.