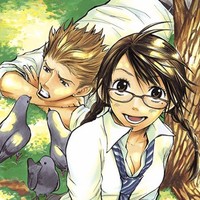 Flunk Punk Rumble (original name: Yankee-kun to Megane-chan) is a 23-volume shounen manga by Miki Yoshikawa, which ran from 2006 to 2011 in Weekly Shonen Magazine.

It was originally just a three part short story published in Weekly Shonen Magazine. These chapters are named "Stand", "Bow", and "Sit". Eventually, it turned into a full series, with the story continuing from the original three chapters; therefore, its first chapter is actually the fourth chapter. By the way that this manga is drawn, it looks like it would make a great anime series, but got a Live-Action Adaptation instead.

Speaking of which, Miki Yoshikawa was the assistant of Hiro Mashima (Rave Master and Fairy Tail), so the art style of this manga is very reminiscent of Mashima's work. This is most apparent in the Intercontinuity Crossover, Fairy Megane.

It's a Slice of Life manga that follows the lives of a "Yankee" named Daichi Shinagawa and a Bespectacled Cutie named Hana Adachi, who is also the Class Representative of Daichi's class (thus the name Yankee-kun to Megane-chan, which can be roughly translated as (The Adventures of) Delinquent Boy and Glasses Girl). In the course of the manga, the two soon formed a whole Five-Man Band, with the genius and Gray look-alike Seiya Chiba, Adachi's former kohai Rinka Himeji and the Marty Stu wannabe Izumi Gaku.

Expect lots of silly facial expressions, comedic circumstances, and quite a few cool fight scenes as Hana ropes Daichi and the gang into her crazy ideas.

A 10 episode live-action drama was broadcast in 2010. It modified some plot points and added some depth and emotion, but the show kept much of the spirit and goofiness of the manga, at least in the first couple of episodes.

Yoshikawa's next series Yamada-kun and the Seven Witches is set in the same universe, and characters from both have met a few times.

An epilogue chapter was released in 2017, expanding on the last chapter of the series.

The Drama provides example of: