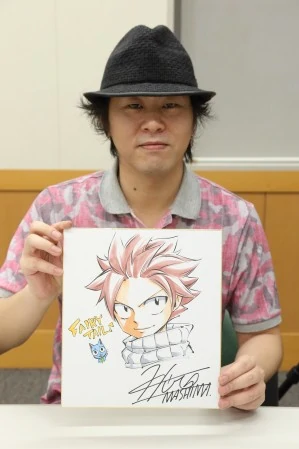 Hiro Mashima (born May 3, 1977) is a Shōnen manga artist most widely known as the creator of Fairy Tail. Getting his start as the winner of an amateur manga competition in 1998, Mashima learned most of what he knows about drawing on his own through his first official serialization, Rave Master, once dropping out of a professional manga school because he felt he wasn't learning anything useful besides the basics.note Contrary to rumors, he was never an assistant or classmate to Eiichiro Oda. He went on to crank out quite the number of series and one-shots over the years, eventually becoming one of the most successful artists for Shōnen Magazine.

Mashima's works are packed with inside jokes and self-references for his long-time readers to chew on, including a cast of identical-looking characters with different names and roles in the same vein as Osamu Tezuka's Star System. Most of his one-shots are compiled in a two-part collection called Hiro Mashima's Playground, which details his early career and some of the budding ideas for his later work. This collection was originally released in Japan in 2003, and eventually published in English in 2018.

As an artist, Mashima's most notable traits are his lightning fast drawing speed and expert time management skills, making him one of the few in the industry to get a minimum of seven hours of sleep per day, even prior to his switch to digital drawing doubling his work speed. Because of this, he's managed to pull off stunts such as releasing batches of two-to-three chapters for weeks at a time, and juggling up to two other short-term weekly serializations with his usual work, all while finding the time to goof off playing video games for hours and still getting all his work done before his assistants.

, which he regularly updates with artwork and sketches.

Tropes applying to Mashima or his works: