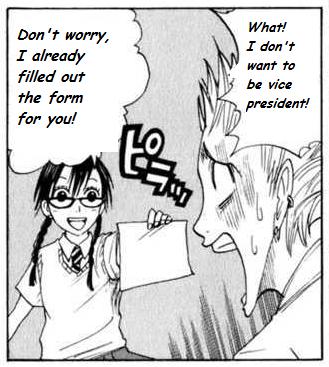 I think this is referred to as "preemptive" recruiting.
Advertisement:

The Extracurricular Enthusiast is an individual who is eager to participate in social organizations, especially school-related. He's at every school football game, is always decked out on school spirit day and when anything new comes up on the school activities radar he's always lurking in the cafeteria as the Heroes sit down for lunch, ready to tell everyone about it, and badger them into signing up.

Common traits an Extracurricular Enthusiast may have is as a plot Catalyst, giving needed information or unilaterally signing the heroes up for a 'fun' day manning the bake sale, whereupon plot will ensue. After doing so they will then leave in a flurry, busy to decorate the gym for homecoming night or something. This is related to another common trait, which is being that person who knows everyone, thus acting as the main character's source for rumors, gossip and any other information about the school history or what's going on around town.

Extracurricular Enthusiasts are not necessarily smart or talented, they are just ready and willing, though the All-Star Soccer Player and the Straight-A Student also tend to be this trope. Sometimes the Extracurricular Enthusiast is motivated to participate in school activities because they want as many things to write down on their college applications as possible. Other motivations might be that they genuinely feel like they are helping some cause, they like being part of something bigger than themselves, or they are just in it for the 'fun'.

Extracurricular Enthusiasts can be any gender and technically be of any age or environment, but they crop up most often in High School Slice of Life stories or College life stories. While the Extracurricular Enthusiast can sometimes overlap with the Nerd, Geek, and Teacher's Pet tropes, they are generally much better accepted by the school population because they do everything 'normal' kids do, they are just also heavily involved in other extracurricular activities (however, they do tend to enjoy tough schoolwork). They are very rarely the Alpha Bitch or Jerk Jock and more often are a minor member of the hero's group or a Satellite Character.

Characters likely to be Extracurricular Enthusiast, are any member of the ASB or Student Council, including The Class Rep and Student Council President. In general, they have more boisterous and outgoing personalities and are rarely a Shrinking Violet. Typical characterizations of the Extracurricular Enthusiast are the Genki Girl or Genki Guy, The Ojou, or Bespectacled Cutie.

Keep in mind that in order to be this trope, a character must be heavily involved in more than one extracurricular activity, or be an aggressive promoter and recruiter of their chosen activity.