Rampage from a Nail 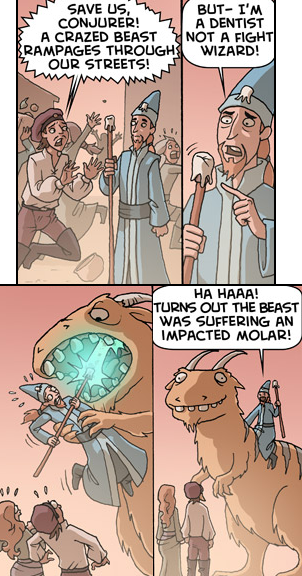 You're just minding your own business when there is suddenly a commotion aroused nearby. A Savage Wolf suddenly appears snarling and chasing everyone in town. No matter what happens, you can't seem to subdue the wolf. Suddenly, as the wolf turns around, you look and see that there is a thorn stuck in the wolf's left hind paw so you quickly trap the wolf with a net. Once the wolf has been subdued, you pull the thorn out from the wolf's foot. The wolf gets back up again, but this time, he starts licking your face and wagging his tail, happy that the thorn is removed.

This is when a creature of some sort wreaks havoc in a nearby community, due to the fact that there is a sharp object stuck on a part of its body. Once you remove the sharp object, the creature is no longer angry. Sometimes, the animal might just run back into the forest without a display of gratitude or affection for whoever stopped the pain.

Not to be confused with: For Want of a Nail. Or I Broke a Nail. Compare: Androcles' Lion.

Demon the Siberian Husky is vicious due to having a bad tooth. Ted easily fixes it because he is a dentist.

Demon the Siberian Husky is vicious due to having a bad tooth. Ted easily fixes it because he is a dentist.