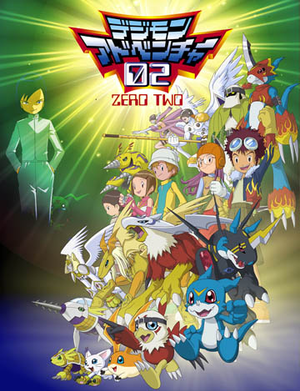 Stand up! A hero is within me.
Three years have passed since the summer we could never forget...
Advertisement:

The second Digimon anime series, and the only direct sequel to another series, Digimon Adventure 02 is set three yearsnote The dub increased the Time Skip to four years after Digimon Adventure. As a point of clarification, the "02" in the title is a dual reference to the series being set in 2002 and to its status as a sequel.

Three years have passed since the original Digi Destined kids saved the Digital World, and they have all grown up and (mostly) gone their separate ways. When a distress call from Agumon draws Taichi, Takeru, and Hikari back into the Digital World, they discover that it has been conquered by a malicious boy calling himself the Digimon Kaiser, who is using a black Digivice to suppress natural evolution and brainwash Digimon into his slaves.

That is until the trio, with the help of new goggle-boy Daisuke (Davis in the dub), discover the power of Armor Evolution, which allows certain Digimon to attain more powerful forms while sidestepping the Kaiser's embargo on evolution. Joined by two other new kids, girly tech geek Miyako Inoue (Yolei) and The Stoic Iori Hida (Cody), this new generation of Digi Destined must use their new powers to stop the Kaiser's ambitions before the entire Digital World is consumed by darkness.

It was succeeded by Digimon Tamers, and years later would get a sequel with Digimon Adventure tri..

It was accompanied by a pair of Short Films. Hurricane Touchdown, also known as Transcendent Evolution! The Golden Digimentals,note The two different titles are actually the respective titles of each half of the movie, pre- and post-intermission is set before Ken joins the Digi Destined, and details their adventures in America and dealings with Wallace, a Digi Destined with twin Digimon; it was dubbed as the third part of Digimon: The Movie. The second film, Diablomon Strikes Back, is set within a year of the finale and is about the Digi Destined's response to the resurrection of Diablomon, the antagonist of Our War Game;note The central segment of Digimon: the Movie it aired in the US as a television special under the name Digimon: Revenge of Diaboromon. Because of the length of time between the end of production on Adventure 02 & the dubbing of Revenge of Diaboromon, it was the only portion of the Adventure era of the show that wasn't produced by Fox, the franchise having since changed hands to Disney, but still reunited the majority of the castnote Joshua Seth was replaced as Tai by Jason Spisak from the first two seasons of the show after 4 years.

Its dub is available on Hulu.