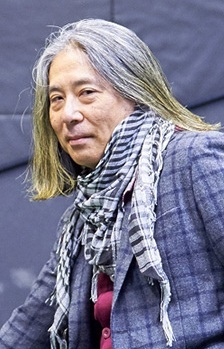 Chiaki Konaka (小中千昭) (born April 4, 1961) is a writer of several notable anime, best known as the head writer of Digimon Tamers and Serial Experiments Lain. Things to look out for in his work are cosmic horror stories, references to H. P. Lovecraft (outside of his anime work, he actually has written a pair of Cthulhu Mythos stories and adapted another to TV) and, if the series involves a connection between the real world and Cyberspace, the names Alice, Reika, and Juri.

Also to be note that he and his brother Kazuya were fans of Ultra Series so the brothers got different Promoted Fanboy positions in working on Ultra Series, including Ultraman Gaia where both worked together. He also put some Kaiju influences in later works, like Digimon Tamers mentioned above.

When his name is presented in a western context, it's typically rendered as "Chiaki J. Konaka"; he adopted the "J" initial for this purpose. This is downright unusual in that Japanese people simply do not have middle names, nor does the "J" have anything to do with the kanji comprising his name, nor is it even explicitly stated to be short for anything...

that the "J" really was just a joke all along, comes from the simple name of John, and that he mainly used it to credit himself just to make his name look cool.

These days, he's mostly writing books and TV scripts and has not been involved in the anime or video game industries since the mid-2000s. He stated that he would return to anime in 2016, but to his fans' chagrin it ended up not happening.

He has a few websites, most notably Alice6

, which hasn't been updated in some time, the Digimon Tamers Update

site, which contains several script download links not found on the older site, and welcome back to wired