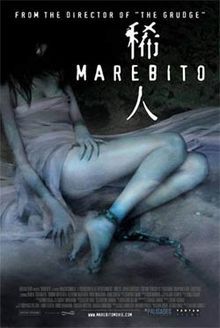 Marebito a 2004 movie by Takashi Shimizu, the director of Ju-on; The Grudge. The screenplay was written by Chiaki Konaka.

A man obsessed with fear finds his way into a warped underground labyrinth world, is menaced by "Dero" ("Detrimental Robots"); and rescues a feral girl (who he names F) who turns out to be a vampire, who he keeps chained up in his apartment, and feeds by killing other people and draining their blood. But is that really happening? Do any of them actually exist? Is the girl real, perhaps his own daughter who he abuses and treats like an animal, while he kills people to feed his own delusion? Or has his detachment from reality actually enabled him to stumble into a real alternate, quasi supernatural world? The ending completely refuses to resolve any of these questions; leaving them up to the viewer to answer.