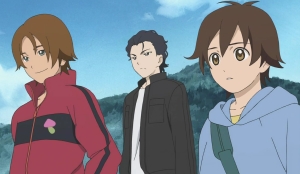 15-year old Tarou lives in the quiet, remote mountain town of Suiten at his parents' sake brewery. He had a traumatizing experience when he and his older sister were kidnapped for ransom 11 years before. His sister died during that event and Tarou now suffers from narcolepsy and recurring nightmares in which he sees her lying on a bed, yet cannot hear her voice nor remember the face of their kidnapper. He also has out-of-body experiences, in which he tries to meet his sister again. His mother has also been deeply affected by the events, prompting her to seek psychiatric help with some limited success.

Tarou discovers two other boys, Masayuki and Makoto, who like him suffered trauma in their past and who can project their astral bodies into the "Unseen World". He also meets Miyako, a young miko at a local shrine who appears to have great spiritual powers, and thinks she might be able to help him on his quest to find out what happened to him and his sister. Add to this the arrival of an eccentric therapist who wants to help Tarou with his problems, and you soon get a complicated story in which seemingly unrelated events appear to have a deeper connection, with a central role for the mysterious biological laboratory located in the mountains near the town.

Ghost Hound is a 22-episode anime series that aired in 2007 and created by Production I.G and Shirow Masamune, who were also responsible for the Ghost in the Shell series, and directed by Ryotaro Nakamura of Serial Experiments Lain and Kino's Journey. It is part fairytale, part detective thriller, and with a great amount of (faux) science thrown in for good measure.