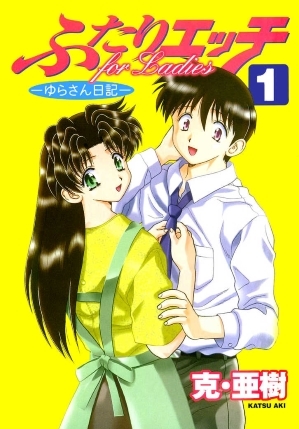 Futari Ecchi ("The Perverted Two") is an adult manga by author Katsu Aki (Love Lucky, Psychic Academy), which has been serialized in Japan in the bi-monthly Young Animal magazine since 1997.

Yura Kawada and Makoto Onoda are two young adults who met recently at a match-making service. After falling in love at first sight, Makoto proposed to Yura soon afterwards... and she accepted! Now with the ceremony behind them, the two eager newlyweds are looking forward to their wedding night. However, there is just one problem: both are twenty-five year old virgins, and neither one of them have a clue about what to do in the bedroom.

The story follows the inexperienced couple as they fumble their way through the ins and outs of married life. The pair are helped along the way by Makoto's pushy older brother Akira, Yura's "experienced" younger sister Rika, their somewhat over-eager parents, and a collection of decidedly quirky friends and neighbors. In the meanwhile, they make friends, make mistakes, make love, and hit upon just about any sexual problem or avenue you might think of (and probably some you wouldn't).

The latest statistics, from 2018, indicate that about 29.5 million volumes of the manga have been sold worldwide. It was briefly licensed in the United States by Tokyopop under the name Manga Sutra — Futari H, but they dropped it after four volumes in 2009. It's also received a four-episode OVA adaptation titled Step Up Love Story (and another three-episode OVA with an original story), and been adapted into a live-action web series and four live-action films. The French edition by Pika was also dropped after 50 volumes (out of 83-and-counting).

Now has a Character Sheet, so feel free to contribute.