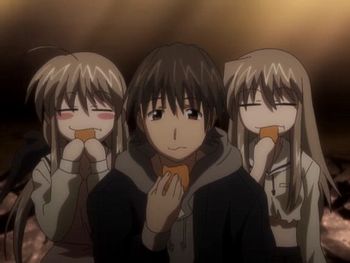 Genre Shift occurs almost by the episode throughout this show. One more serious example takes Rentarou from trying to resolve conflicted feelings of romance and responsibility to racing a bio-hybrid squid down a highway on a friend's bike in two adjacent episodes. The show does have an overarching plot, dealing with a mutual (and surprisingly non-rival) sibling love triangle.