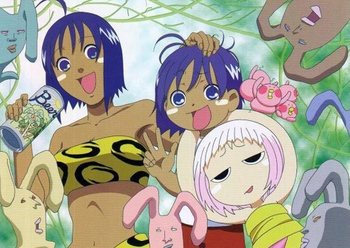 Haré+Guu is a manga created by Renjuuro Kindaichi note  who despite her masculine pen name is actually female for Square Enix's primary manga magazine Monthly Shonen GanGan, where it was serialized from 1997 to 2002.

The series later received an anime adaptation in 2001 , directed by Tsutomu Mizushima in his second directorial outing note  He directed the 12 minute short accompanying the 7th Crayon Shin-chan movie before this , animated by Shin-Ei Animation of Doraemon and Crayon Shin-chan fame and broadcast on TV Tokyo, with 2 OVA's following afterwards.

The series follows Haré, a boy who lives in a jungle village with his mother Weda, who is still rather young and somewhat of an alcoholic. Life is good in the jungle, and Haré is a happy boy, until the day a monster eats him. He wakes up the next morning, uneaten and in his own bed. While he is wondering if it was all a dream, Weda announces that she has adopted a little girl named Guu. With her pink hair, shining eyes, and sweet smile, Guu charms Haré's mother — but when Weda's back is turned, Guu becomes a scowling dark presence that frightens Haré. Not only that, she is capable of swallowing anything she takes a fancy to — whole bananas, live birds, even people and landscapes — and Haré discovers that anything Guu swallows is still alive inside her, in a completely different world...

Haré's life turns into an endless parade of torments by Guu as he tries to keep her out of trouble, and find out what kind of creature she really is. This is all made rather difficult by the wide array of paranormal abilities she possesses, the bizarre supernatural events that happen around her, and her enjoyment in toying with Hare's neurosis.

Despite the apparent horror overtones, this is actually a rather wild and surreal comedy, kind of like the Cthulhu Mythos as written by Mel Brooks or perhaps Zucker/Abrahams/Zucker. It's filled with sight gags and absurdities (the "primitive" jungle village, for instance, is filled with all manner of conveniences such as a public address system and video games). Still, there are serious elements hidden behind the comedy — for instance, Haré is almost 10, and his mother is only 24, and he worries about why she moved to the jungle village. A severe Mood Whiplash results when it turns out Weda got pregnant ten years ago by a character who COMES BACK, making Haré realize he's been a bastard child all this time.

The Japanese title of the series, Jungle wa Itsumo Hare nochi Guu, is a rather elaborate pun that can be read several different ways, due to different readings of some of the words:

and the most obscure, a pun on a common phrase in Japanese weather forecasts:

Any way you read it, it means Guu is turning Hare's life upside down.