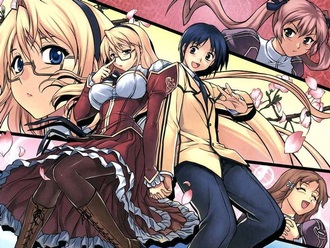 Freezing is a manga from the team of Dal-young Im (author) and KIM Kwang Hyun (artist). It is published by Comic Valkyrie in Japan and by Haksan Pub in Booking magazine in South Korea. It is licensed by Seven Seas Entertainment in North America, although the earlier volumes are currently out of print.

Beings from a different dimension, called Novas, have started a war with mankind. To counter this threat, mankind has manufactured tissue called "Stigmata" and fuses it into the bodies of young women to create female warriors called "Pandoras," who can wield special weaponry and armor. Taking younger boys called "limiters" as partners, these warriors fight in two-person teams, which can be expanded into small squadrons. "Pandoras" are also the only power on Earth that have the power to resist the Nova's freezing effect.

Kazuya Aoi decided to enroll in West Genetics Academy, a top school for training Pandoras and Limiters because of a promise with Kazuha, his sister, an outstanding alumnus who died in battle. On the first day at school, he meets Satellizer el Bridget, nicknamed "The Untouchable Queen" due to her solitary demeanor but also the top student of the academy whose battle simulation streak was undefeated, until he came... and slowly changed her.

The official site (in Japanese) can be found here.

An anime adaptation began airing in January 2011, and is simulcasted by FUNimation

as well as licensed. A second season titled ''Freezing: Vibration" aired as a part of the Fall 2013 Anime season.

There are two prequel manga to accompany the main story line. One is called Freezing: First Chronicle, a short, completed work starring School Council President Chiffon Fairchild and showcasing her history with her friend Ticy during Chiffon's first year at the academy. The second one, titled Freezing: Zero, is currently ongoing and chronicles the backstories of various Pandoras before they entered Genetics.

A spin-off, Freezing: Pair Love Stories, details how some of the Pandoras and Limiters met each other.

Not to be confused with anything called Frozen.