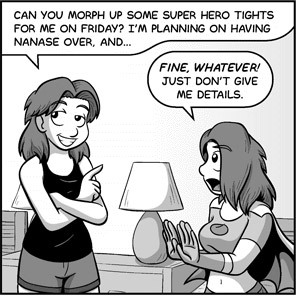 "I dream of the day when I will learn to stop asking questions to which I will regret learning the answers."
— Roy Greenhilt, The Order of the Stick
Advertisement:

A character hears something that ends up Squicking the hell out of them, such as the sex lives of people they desperately try not to think about in the same sentence as the word "sex" (such as parents or grandparents). Other bodily functions are the other most common variant, such as anything to do with bowel movements or a woman's menstrual cycle. Especially while the speakee is eating.

Named after a typical response for such information, usually abbreviated to TMI in Valley Girl speak. The abbreviation can be expanded into WTMI, or Way Too Much Information, which looks like a TV or Radio station callsign, leading to the quip of "You're listening to Radio WTMI, All The News you didn't want to know." Also known as an "Overshare" or — among the computer nerdly — a "sharing violation".

Compare with Bread, Eggs, Milk, Squick and Embarrassing Cover Up. Sometimes followed by Never Say That Again, Ignoring by Singing, Brain Bleach, or Change the Uncomfortable Subject. Can be a result of Dirty Mind-Reading or Show, Don't Tell taken too far. Not related to More Information Than You Require. Contrast You Don't Want to Know and Don't Ask. Similar to Saying Too Much. Not to be confused with I'll Never Tell You What I'm Telling You!, which involves giving away too much information that was supposed to be secret.