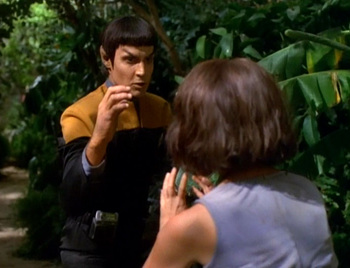 The one episode that gives some focus to Vorik, and it's really, really creepy.
"You're afraid that your big, scary Klingon side might have been showing. Well, I saw it up close and you know, it wasn't so terrible. In fact, I wouldn't mind seeing it again someday."
"Careful what you wish for, Lieutenant."
—Tom Paris and B'Elanna Torres
Advertisement:

B'Elanna Torres is surprised when Vorik, a Vulcan crewman in her Engineering team, suddenly declares his affections. When B'Elanna turns down the offer, Vorik tries to force a Mind Meld on her and gets punched in the face for his trouble. The Doctor realises that Vorik is undergoing the pon farr, the Vulcan mating urge that occurs every seven years. As he attempts to treat his reluctant patient, B'Elanna starts acting strangely while on an Away Mission.