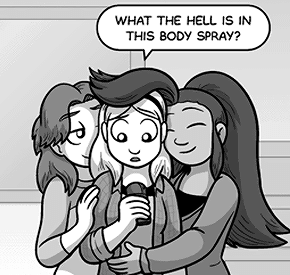 "You vampires. Did anybody ever tell you the whole smelling people thing's a little gross?"
— Buffy the Vampire Slayer, "Chosen"
Advertisement:

This is the The Nose Knows version of Mr. Fanservice, Ms. Fanservice, and the Head-Turning Beauty. It is the reason why humans invented perfume and cologne. A character with Super Senses will probably be attracted to a person by their smell, especially if they've got some doggish attributes. Both vampires and werewolves are likely to note that their victim/lover smells good.

In Real Life, countless species use Pheromones for communication, especially for identifying when its members are able to reproduce. In fiction, this is a little more explicit... a character will 'smell sexy', and often there will be a list of exactly what that character smells like. Expect a man to lovingly bury his face in the girl's hair, or nuzzling her neck as he tells her how wonderful she smells. Often, this calls back to baser, more bestial desires and needs, although it can be 'pure and romantic'.

May be related to Love Is in the Air, if the 'love flu' is coming off of one person. See Aroused by Their Voice for when a character's voice arouses other characters. May involve Perverted Sniffing.