Kissing Under the Influence 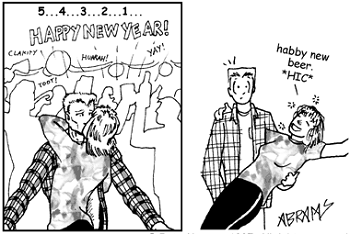 Two characters kiss due to the influence of mind-altering Applied Phlebotinum — or just plain ol' mind-altering substances like alcohol — to which one (or possibly both) of them have been exposed. The kiss may be directly caused by scientific or magical means, or be the eventual result from some kind of love spell. In one-sided cases, even though the unaffected participant is hardly — if ever — the one who cast the spell, he or she doesn't object.

This affliction usually strikes characters (a) who would never kiss when they're both sane, (b) whom fans have been dying to see kiss for many a season or both. The trope's potential lies in the fact that the couple's shippers can Squee, and everyone else can brush it off with, "It wasn't real."

See also Intoxication Ensues and Alcohol-Induced Idiocy. If it doesn't stop with just the kiss, it's Aliens Made Them Do It. If one of them Defies this trope and refuses to take advantage, they're Above the Influence.

Not to be confused with But Liquor Is Quicker or Slipping a Mickey, which are done very deliberately to Invoke this trope.

Upon being brainwashed by Junketsu, Ryuko kisses Nui.

Upon being brainwashed by Junketsu, Ryuko kisses Nui.