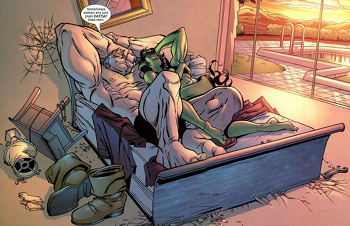 When beds get destroyed.
"Sex is always better when you're breaking something."
— Lockpick Pornography by Joey Comeau
Advertisement:

Sometimes, a couple has supernatural strength, or are just really rough (or, for that matter, really large and heavy). But they still need to fulfill their sexual desires. This is the result of them being stronger than their surroundings.

The location they've chosen for their night of passion breaks up around them as they display their sex drive. By the time they finish their act, they're surrounded by broken timbers, falling plaster, rattling floors, and shattered furniture.

There's usually no actual anger or rage involved. That's Slap-Slap-Kiss or Interplay of Sex and Violence. This is also commonly used to insinuate one character's sexual prowess. Contrast Man of Steel, Woman of Kleenex where sex between a supernatural and a mortal is impossible because of the power difference. See also Did the Earth Move for You, Too? for when this happens during a disastrous event, Out with a Bang for when the someone dies as a direct result of having sex and Post Coital Collapse for when sex is implied by showing the couple collapsing after finishing.