Film / The Hour of the Pig 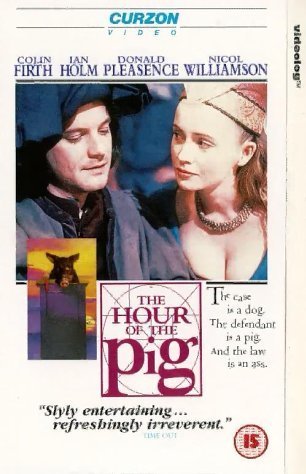 A 1993 British film, released in the United States as The Advocate, written and directed by Leslie Megahey and starring Colin Firth, Ian Holm, Donald Pleasence, Amina Annabi and Nicol Williamson. Much of its plot is based on real historical trials of animals in France from the late Middle Ages to the early modern period. See here

for one source.
Advertisement:

Maître Richard Courtois (Firth), a lawyer, has left Paris with his clerk Mathieu, traveling to Abbeville in Ponthieu, then part of Burgundy rather than France, for what they believe will be a quiet, rural existence. However, the first thing they witness on arriving in the town is a man condemned for bestiality about to be hanged at the side of the donkey he sodomized. Then a pardon is given due to a mass petition from the villagers... on the donkey's behalf, who is deemed innocent, while the convicted man is hanged. After this strange arrival, Courtois quickly takes up many backlogged cases.

As he navigates the local law in court, Courtois finds work defending local clients. Courtois fails to save a client accused of witchcraft because Ponthieu law differs in a way he did not know from the Roman French law. Courtois defends a pig belonging to some Moors when it is charged with murdering a Jewish boy. They are desperate to save it, since the pig would be their only food over the winter, and one of them, Samira, even offered to sleep with him if he takes the case (Courtois declines her offer). He quickly learns there is more to the case than what appears at first glance, as the local lord tries various ways of influencing him toward losing. The lord's children are shown to be eccentric or mad, and it is revealed that the family has a dark past.

The case appears lost when the lord exercises his feudal right and prepares to decide the trial personally, but then it is adjourned for Advent. Courtois declines advice from the prosecutor that he return to Paris, where greater opportunity awaits him, and commissions a house in Abbeville. While laying the foundation, however, the body of another Jewish boy killed a year earlier is uncovered. Courtois begins to suspect that a human killer was responsible, and his client has been falsely accused.