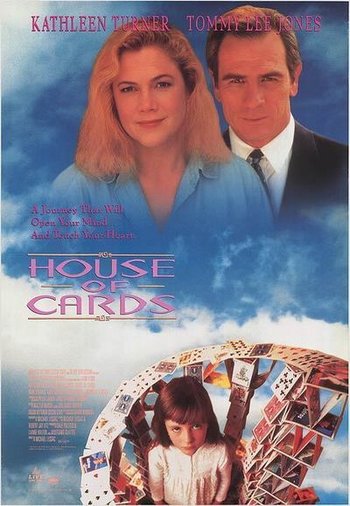 House of Cards is an American drama film directed by Michael Lessac and written by Lessac and Robert Jay Litz.
Advertisement:

After archaeologist Alex Matthews is killed by accident at a dig in South America, his wife Ruth (Kathleen Turner) and children Michael (Shiloh Strong) and Sally (Asha Menina) return to their former home in an American suburb. As soon as they arrive, Sally goes mute and starts displaying unusual behavior, such as climbing on the roof, shrieking repetitively when things are changed, and creating elaborate card houses. Dr. Jake Beerlander (Tommy Lee Jones) diagnoses her with autism and wants to start behavioral therapy, but Ruth wants to try to get inside Sally's world and communicate with her on her level.

Not to be confused with the acclaimed British drama series or its American counterpart.

House of Cards contains examples of: