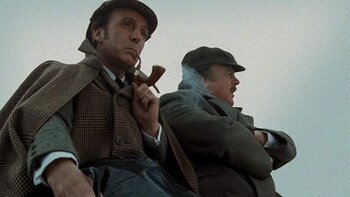 This adaptation of the classic Arthur Conan Doyle tale follows Sherlock Holmes and his trusty companion, Dr. Watson, as they look into an alleged curse on the family of Sir Henry Baskerville. Tormented by sightings of a large vicious dog, Baskerville is convinced that the canine brings death, which seems to be the case when people begin turning up dead out on the misty moors.

Tropes unique to this adaptation: