Our Nudity Is Different 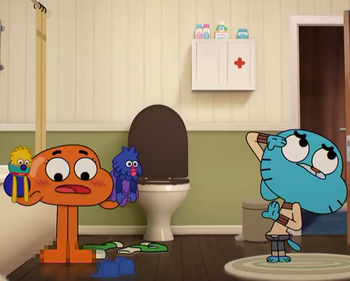 "Dude! Can you cover yourself up first?"
"I hate to break it to you, but you're going to start panics going around with naked hands."
— Nirai Kujen, Revenant Gun, The Machineries of Empire
Advertisement:

This trope is for those characters that have a notably different definition of "private parts" than most of the audience.

Different cultures have different ideas about what parts of the body can or cannot be shown, or even discussed. For some people on this Earth, even a woman's face or hair must not be exposed, while for others, you can be topless as long as you keep your shins covered (a girl has to have modesty, after all!), and in still others a small loincloth is all that's required. Then there's the characters in Fantasy/Sci-Fi settings who may be outright scandalized if they discover their orthoblaxer (whatever that means) is showing.

Please do not add real life examples unless historical or otherwise well-documented.