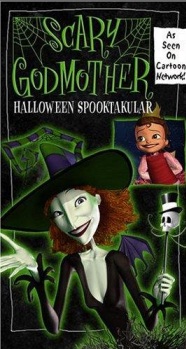 Scary Godmother Halloween Spooktacular is a 2003 TV movie based on a series of children's books by Jill Thompson. It's about a girl named Hannah Marie who is locked in a haunted house by her cousin Jimmy and his friends. Hannah is understandably terrified... that is, until her Scary Godmother shows up and invites her to her annual Halloween party. Scary Godmother takes her to the Fright Side, where Hannah is introduced to her 'broom-mates' and fellow monsters:

There is also a follow-up named Scary Godmother: The Revenge of Jimmy.