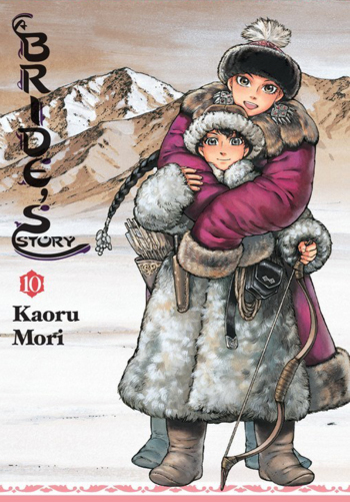 A Bride's Story (乙嫁語り, Otoyomegatari) is a seinen manga and yet another period romance from Kaoru Mori. The manga began serialization in Harta magazine (formerly called Fellows!) in 2008, and later moved to Aokishi in 2021, where it is still ongoing.

This time, the setting is Great Game-era Central Asia, at the time of The Crimean War in the mid-19th century. Set on The Silk Road that connected Asia with Europe before modern times, it is the Slice of Life story of Amir, a nomadic tribeswoman skilled in archery and horsemanship, who is sent to marry Karluk, a boy from another village who is eight years younger than her. Despite their age difference, the newlyweds like each other very much and follow a patient path leading towards grown-up love. But all is not well: the Russians are expanding south, political unrest is brewing, and Amir's family now want to take her back. The narrative follows not just Karluk and Amir as they navigate these challenges, but also various characters around them who are engaged in trying to better their lives or end up finding their special someone.

As with all of Mori's works, the art and attention to detail is extensive, although Mori can put more effort into this particular work with less pressure, since it is a bimonthly publication.

Published in English by Yen Press in larger-than-usual hardcover volumes to show off Mori's artwork.