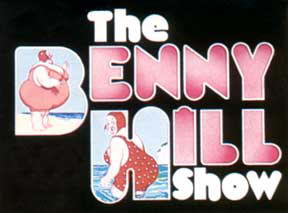 The Benny Hill Show is a British comedy series that cemented the career of one Benny Hill. Although the show began all the way back in 1955 on The BBC (with a few occasional episodes on ATV), it is best known for its 1969-89 run on Thames. There was also a couple of international one-off specials, one broadcast on Channel 10 in Australia in 1977 (Benny Hill Down Under) and one broadcast on USA Network in the United States in 1991 (Benny Hill's World Tour: New York!).

Strangely, it became far more popular in the United States, leaving a lot of Brits to wonder what all the fuss was about. (Compounded by the fact that it hasn't been shown on network television in Great Britain since 1992.)

The ending song of The Benny Hill Show was "Yakety Sax

" by Boots Randolph, an infamous ear worm if there ever was one, with the ability to inject relentless levity into any situation. Endlessly parodied; if there's a nonsensical Chase Scene (or anything