Series / Beowulf: Return to the Shieldlands 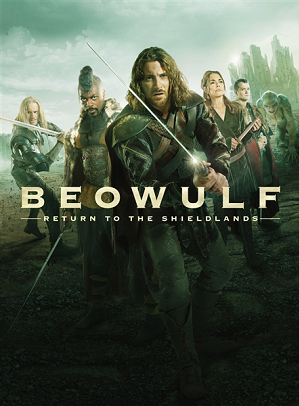 Beowulf is a British epic fantasy drama television series from ITV, consisting of 12 episodes and created by James Dormer, Tim Haines, and Katie Newman. Dormer wrote the series based on the poem Beowulf and executive produced along with Haines and Newman, while Stephen Smallwood produced the series. The series began airing in the United Kingdom on 3 January 2016.

The story is a re-imagining of themes and characters from the Anglo-Saxon poem Beowulf, but with new characters and storylines added.

Beowulf is ITV's second major fantasy-based show of the 2015-16 season following Jekyll and Hyde (2015). Both series were shown in early-evening Sunday slots, fueling controversy about their violent content. Neither achieved its expected ratings, and both were cancelled, probably in favour of more "mundane" contemporary or historical dramas.

Elvina: He is my son.