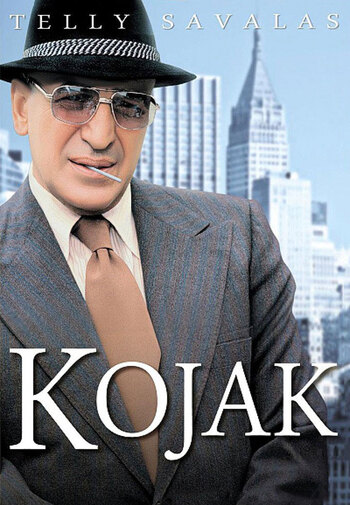 Kojak was a Police Procedural drama that aired on CBS from 1973-78.

Set in "Manhattan South" (New York City's Thirteenth Precinct), the series is named for Lt. Theodore "Theo" Kojak (Telly Savalas in his most famous role besides that one time he played Blofeld). He might not observe all the niceties when it comes to his $240-a-week-after-taxes job, but he gets the job done, ya dig? A Greek-American who pronounces the "w" in "sword," this cop knows who Confucius is, and has read Edgar Allan Poe. He grew up in a "sewer" he now wants to clean up, but he's also sympathetic to the junkies, whores, stoolies, and other damaged people he encounters. After all, he grew up alongside them, in the same neighborhood. Also added to the mix are members of his squad: wet-behind-the-ears Det. Crocker (Kevin Dobson), slovenly Det. Stavros (George Savalas), and fretful Cpn. McNeil (Dan Frazer).

Kojak originated in a TV movie called The Marcus-Nelson Murders, based loosely on the "Career Girls Murders" used in the ground-breaking Miranda Supreme Court decision. Kojak was a stand-in for the various detectives involved in the case. In the early episodes of the series, Kojak smoked heavily; in order to reflect the anti-smoking sentiment gaining momentum on American TV, the writers decided that Kojak had quit smoking. He began sucking on lollipops as a substitute, which became a trademark of the character — along with his Bailey Gentry fedora and sunglasses.

The series was rebooted in 2005 starring Ving Rhames in the title role, but was axed again after a single ten episode season. Vin Diesel has more recently been trying to develop a feature film adaptation of the series as a starring vehicle.

Not to be confused with Kolchak. Or Kodak, for that matter.