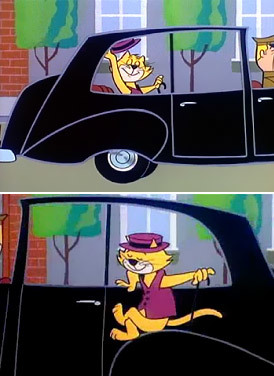 Someone poses with or appears to be riding in a good-looking vehicle. A shift of view, and it's revealed they drive something MUCH less glamourous — The Alleged Car and bicycles are common. A variation (excellently demonstrated by the image on the right) is for that person to be indeed riding said good-looking vehicle, but not actually in it.

See Not This One, That One if it's the character being fooled as well as, or instead of, the audience about which vehicle they're going to take.