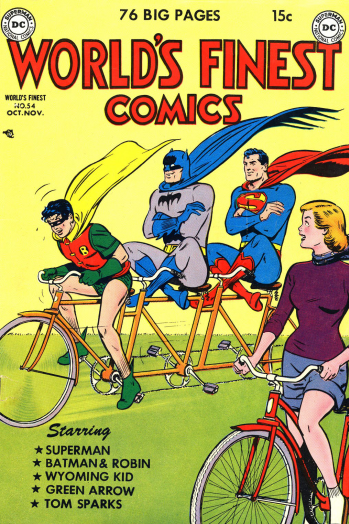 A tandem bicycle is that type of two-seat bikes with two sets of pedals that aging liberal couples and teenagers in Public Service Announcements ride everywhere. It works on the principle "2>1", according to which, it's easier to ride if there are two people doing the pedalling.

But, not all is good, because, as always, evil rears its ugly head in the form of a Tandem Parasite. This is the one in the back seat, whose parasitism is not visible to the hard-working front-seater. The rear-seater doesn't pedal at all, but rather crosses his leg and smiles as the poor soul in front of him does twice the work he should be doing - the idea here is that the rear-seater is mockingly taking advantage of the rider.

It should be noted that, sometimes, the parasite has some reason not to pedal, like being distracted, or having been hurt, if you buy those cheap excuses.

A Dead Horse Trope, or even a Dead Unicorn Trope.