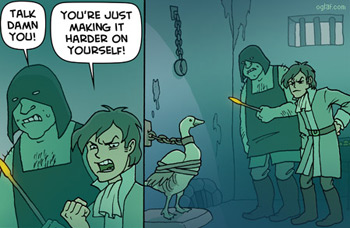 The camera is focused in — just enough so the viewers can't see the whole set. Then the camera pans out a bit, or cuts to a wider view. We now see something else, which significantly changes the situation, often for the worse.

Sometimes preceded by a Reaction Shot to build suspense. Other times, there's no warning, usually because the characters are seeing it the same time as the viewers are.

This trope probably evolved from radio, where a standard gag was to slowly reveal what something looked like, with the last bit totally changing the situation.

Contrast with Unreveal Angle, where nothing gets revealed and the audience is left wanting to see more. Sometimes paired with Bread, Eggs, Milk, Squick.

A messenger is revealed to be imprisoned by Viren only after the camera zooms out.

A messenger is revealed to be imprisoned by Viren only after the camera zooms out.