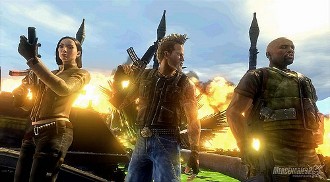 Grand Theft Auto fans, you're in the army now.
Fiona: You know, they say the DMZ's the most dangerous place on earth.
Nilsson: Just wait 'til I get there.
Advertisement:

Mercenaries is a military sandbox series by Pandemic Studios, makers of Army Men: RTS, Star Wars: Battlefront, and The Saboteur. The plot revolves around the titular Mercenaries, each of them employed by the private military contractor Executive Operations. With the help of their support operative, Fiona, the trio compete for bounties in hot spots throughout the globe. ExOps isn't in the humanitarian business: They accept contracts from Washington, Beijing, crime syndicates, and even other private corporations — for a price.

The first game, Playground of Destruction, is set in North Korea. You're air-dropped into the middle of a war zone in search of nuke-happy dictator General Choi Song, who happens to have a huge bounty on his head. In order to gather intel on his whereabouts, the player must kill or capture his most trusted allies who, along with Song (codenamed the Ace of Spades), are collectively known as the "Deck of 52". The player can choose to work for four factions (South Korea, China, the Russian mob, or the "Allied Nations"), as they're the ones paying the bounties.

The two main things PoD brought to the table were destructible environments (any structure has a 'life bar' and can be leveled with enough rockets or C4) and a smorgasbord of air strikes you can call in for a fee, raining death on your targets, whether inanimate or otherwise.

Though overshadowed by the likes of Just Cause, the game sold well and garnered enough of a cult following to warrant a sequel: World in Flames. Set in Venezuela, a social-climbing oil exec hires the mercenaries, shafts them out of their payday, and then crowns himself the new president. The over-arching mission is to take him down, but in order to get there, the mercs must once again form alliances with various factions, including: guerrillas, Rastafarian pirates, Big Oil, and the returning AN and Chinese superpowers. Each of the factions seek to control the outflux of oil. More care and attention is given to the explosions, particle effects, and the way buildings deteriorate. This game was sort of Just Cause 2 before Just Cause 2: you can grapple onto and hijack helicopters later in the game.

The primary cast of Mercenaries are as follows:

The team who made it were killed by Electronic Arts, so a trilogy is unlikely. Following the buyout, a demo was leaked of Mercs, Inc., apparently a co-op continuation of the franchise. John Ricitello claimed that EA had a commitment to Pandemic's old franchises, implying that Mercs, Inc. was in-development. But it was cancelled when Danger Close Games shuttered in 2013.

A three-issue comicbook miniseries was released by Dynamite Entertainment

, written by Brian Reed (who also wrote the cutscene dialogue for World In Flames) was released in early 2008, as a prequel to the second game. It features the three mercenaries fighting for Taiwanese guerrillas against a Chinese invasion. Things go South, and for one merc, It's Personal.

For mercenaries in general, see the Hired Guns index, and Private Military Contractors in particular. The 2014 Asylum film can be found here.

Tropes seen in the Mercenaries series include:

open/close all folders
Series as a Whole
Playground of Destruction
Josef: There is a Russian proverb: The bear who sees the trap cannot be caught.
World In Flames

Oh no you didn't!
I'm a mercenary, you ain't got a prayer, you owe 'meeeeeeee!