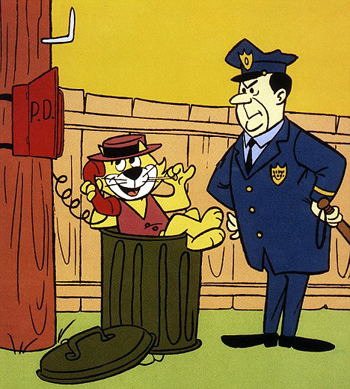 "Baker, let me tell you a little secret. A patrolling officer on his beat is the one true dictatorship in America. We can lock a guy up on a humble, lock him up for real, or say 'Fuck it, let's pull under the expressway and drink ourselves to death', and our side partners will cover it. So no one... and I mean no one tells us how to waste our shift."
— Jimmy McNulty, The Wire
Advertisement:

This is the beat cop who wears a uniform, patrols the neighborhood, controls traffic at cross-sections, and watches for infractions to the road code. Heroes who break the law whether unwittingly or out of childish mischief will likely end up on his wrong side, and be given a fine or taken to the local police precinct. Neither a Rabid Cop, a Cowboy Cop, a Dirty Cop, nor an Old-Fashioned Copper, the Meddlesome Patrolman is still liable to be as annoying as the Obstructive Bureaucrat. Liable to give you The Trouble with Tickets.

A frequent recurring minor character in classic Belgian Comics and Franco-Belgian Comics and an obvious foil to protagonists who are either street urchins or just regular children who use the streets as a playground. So, expect some examples to be found in older American shows and comic strips (basically dating from before the rise of suburbia). The meter maid is a possible variation.

Funny story, actually; Paul McCartney wrote this one as a sarcastic love song to a woman who had given him a ticket not too long prior. When asked about the woman's name, his reply was something along the lines of "She looked like a Rita to me." It is no doubt merely coincidence that choosing that name made it easier to find rhymes for "parking meter"...