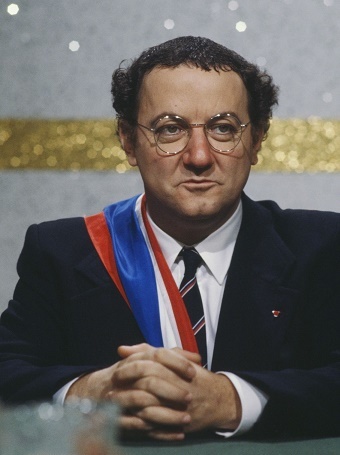 "I would tell politicians who think I'm a funnyman that it's not me who started."
Advertisement:

He adopted his stage name at age 26, when his stage career took off. He became famous for his irreverent attitude towards French politicians and establishment of The '70s and the early '80s, incorporating this into much of his material. He was one of the first major comedians to regularly use profanities for humorous effect on French television ("I'm coarse but not vulgar", as he said). While it started as a joke, he even considered running for the French presidency in 1981, then opted out under political pressure.

He also had success in comedies on the big screen, such as with The Wing or the Thigh alongside the legendary Louis de Funès. He ended up Playing Against Type in 1983 with Tchao Pantin, which earned him a number of awards. Upon seeing that many people living on French soil could not afford food, he created the charity association "Les Restaurants du Cœur" in 1985 (literally "Restaurants of the Heart" but meaning "Restaurants of Love"), commonly and familiarly known as "Les Restos du Cœur".

A fan of motorcycling, Coluche died in a road accident (he crashed into a truck) on June 19, 1986 in Opio, near Grasse, in the South-Eastern French department of Alpes-Maritimes, at the age of 41. For many French people, he remains a gone-too-soon icon of The '80s.

A biopic about him was released in 2008 in which he was portrayed by François-Xavier Demaison, titled Coluche: L'Histoire d'un mec.

Tropes & trivia about him, his acts and his works: