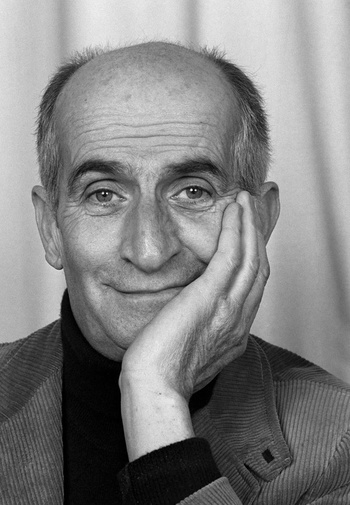 Louis Germain David de Funès de Galarza (31 July 1914 – 27 January 1983) was a hugely popular French comedy actor of Spanish descent. He played in more than 150 movies, and he is still well remembered and very beloved in the francophone world and Continental Europe in general.

Once he started getting successful past the age of fifty — after a lengthy career of minor and mostly ungrateful roles —, De Funès always played the same character: a hyperactive, greedy, self-important, stubborn and unsympathetic little man who often threw himself into temper tantrums with amusing facial expressions and nervous tics. He had Pantalone and Donald Duck as his main inspirations. Sure, it was textbook typecasting and put him into something akin to a Comedy Ghetto with critics, but that's what he felt he did best, and audiences never failed to massively show up in theaters and ask for more. Whenever his most famous films are broadcast on prime time on French television, they still attract millions of viewers even close to four decades after his passing.

One of his most iconic roles was Gendarmerie officer Ludovic Cruchot in Le Gendarme de Saint-Tropez (1964), about a local military police force in the South of France. It spawned five sequels in total until 1982.

Tropes featured in his works: