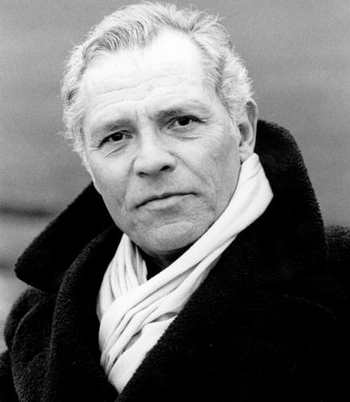 He's had very few movie roles, albeit quite memorable ones, such as Philippe de Plessis-Bellières in the 1960s Angélique period pieces and fugitive rebel leader Mohamed Larbi Slimane in The Mad Adventures of Rabbi Jacob.

Among many others, he frequently dubbed Robert Redford, Tommy Lee Jones, Jon Voight, Tom Selleck (though sadly not in Magnum, P.I.), Liam Neeson and Alan Rickman (Severus Snape in the Harry Potter films, most notably).

He also dubbed Patrick Stewart as Captain Jean-Luc Picard in Star Trek: The Next Generation and Harrison Ford as Indiana Jones in Raiders of the Lost Ark (followed by Francis Lax and Richard Darbois in the next films), and he is well remembered as the French voice of Ulysses in the animated series Ulysses 31.

He retired from acting and voice acting in 2012 and passed away at age 84 on November 3, 2020. That was three days after the passing of Sean Connery, who was dubbed in French by Giraud in The Name of the Rose.