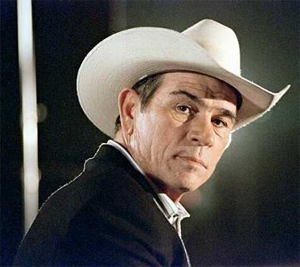 "As an actor to watch an audience of people howl together in a single mind as a result of work you've done together with friends is a privilege."
Advertisement:

Tommy Lee Jones (born September 15, 1946) is an American actor and film director. He was little known until his big breaks in the 1990s, where he scored roles in three blockbuster films: The Fugitive, Batman Forever, and Men in Black. He fell off the radar for a few years until his resurgence with No Country for Old Men.

He was also Al Gore's roommate at Harvard. Figure that one out. And in case you've managed to wrap your head around that, according to author Erich Segal (who attended Harvard at the same time), the hero of his novel Love Story was based on a fusion of the two of them.note He also played football for Harvard and played in the famous 1968 Harvard-Yale game recounted in documentary Harvard Beats Yale 29-29.

Try not to confuse him with Tom Jones. Or even Tommy Lee.